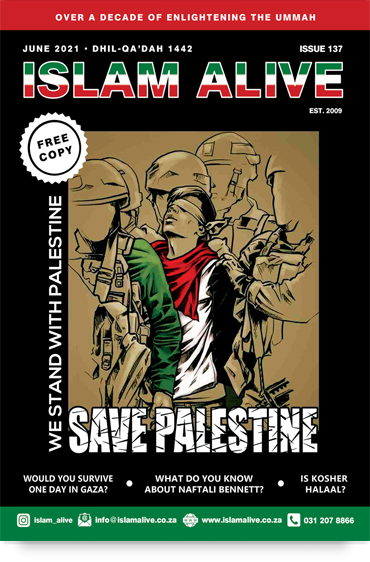 The Islam Alive magazine was launched just after Ramadaan 1430 - November 2009. Since its inception the magazine was received with great enthusiasm, and became an instant conversation piece within the Muslim Community. We had made it clear that this magazine will not attack or condemn any Organization or Religious group within the fold of Islam.

Part of our success comes from the fact that we have taken a stance to publish only articles that portray Islam in its holistic form, thereby creating and promoting unity among the Muslim community. On the outset, we had decided and plotted the course of the magazine with an intention of growing the publication.

We had selected a clean set of advertisers who adhere to the ruling of not publishing any photographs with their adverts. We found this to be the factor that separates us from most of the other Islamic Publications, the other factor that makes Islam Alive as popular as it is, is the choice of material. We choose not to cover News, or Islamic Politics, our material pertains to subjects that are relevant to our community and have adopted a straightforward manner in which to deliver our message.

Missed our past issues or didnt receive the latest issue? Click the link below

Want to book an ad?
CALL US TODAY
And lets get your business to the next level
CALL NOW